The "real and now" of climate change for BC's shellfish

The "real and now" of climate change for BC's shellfish 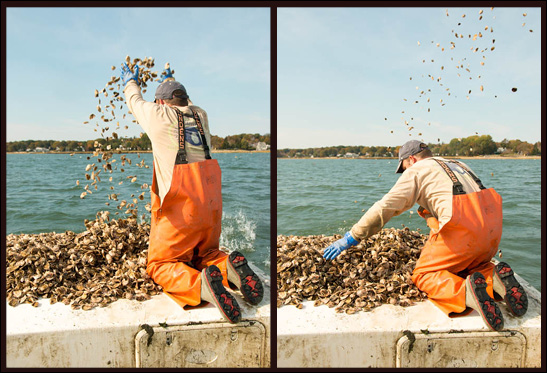 Discussions of climate change tend to be predicated upon some far-off future. When reading about sea level rise, feedback loops, or other ramifications of global climate change, I often find myself honing in on timelines. I’m comforted by the hope that the dystopian future will be after I’m dead. Or so I like to think.

This June, WCEL staff lawyer Anna Johnston and I went on road trip to Vancouver Island to hear from people who have been affected by rollbacks to Canada’s environmental laws.  We met with Canadians from all walks of life and backgrounds, but the conversations that have stuck with me the most are those I had with the oyster farmers I met on the east coast of the island.

Oyster and other shellfish farmers along the Georgia Strait are experiencing the effects of climate change today. The oceans are becoming acidic. Every year, roughly one third of the carbon dioxide from fossil fuel emissions dissolves in the oceans, forming carbonic acid. In the past 200 years, global oceans have become 30% more acidic – the most dramatic change in ocean chemistry in the past 50 million years.

Coastal British Columbia and the Strait of Georgia are particularly susceptible to changing ocean acidity. As a result of seasonal upwelling, cold, acidic water is welled up from the bottom of the pacific and pushed to the shallow waters of British Columbia’s bay, inlets, and shores. For many along the coast who depend on the health of the oceans for their livelihood, the affects of acidification are happening now.

Farmed oysters are Canada’s second most valuable shellfish aquaculture species, with British Columbia being the largest producer in the country. The industry is predominantly concentrated along the east coast of Vancouver Island in Fanny Bay, Baynes Sound, and Cortes Island.  The oyster farmers I spoke with told me that they are extremely concerned about the short-term future of their industry. For shellfish such as oysters, mussels, clams, and scallops, the more acidic the water, the more difficult it is for them to build their skeletons from calcium carbonate.

From BC to Oregon, oyster farmers are reporting record attrition rates and die-off of their harvests. Last year, Parksville-based Island Scallops was forced to shutdown a processing plant and lay off a third of its work force after 10 million scallops were killed.  Although the cause has yet to be definitively determined, many are pointing the finger at the pH of the Strait of Georgia.

Meeting with oyster farmers was a harsh reminder that the climate is changing quickly, the impacts of which I will see in my lifetime.  Despite the obvious pressing need for climate action, in 2012 the federal government repealed the Kyoto Protocol Implementation Act, Canada’s only law requiring it to make a binding plan for reducing its greenhouse gas emissions.

The endless evidence and calls from scientists, activists, and humanitarians is clear: Canada needs to act strongly on climate change, and it needs to act now. Groups across the country are calling on the government to play a leading role in securing a fair, ambitious and lasting global climate agreement with legal force in 2015, and introduce a domestic action plan for Canada to reach or exceed the newly agreed targets for reduction of carbon emissions, as well as those agreed to under the Copenhagen Accord.

To join Canadians from coast to coast to coast in demanding environmental laws that protect our local communities, ecosystems, health and economy, pledge to vote for a fair and sustainable Canada in this federal election. You can also learn more about the environmental law rollbacks and what Canadians can do to secure lasting legal protection for a climate-safe future.